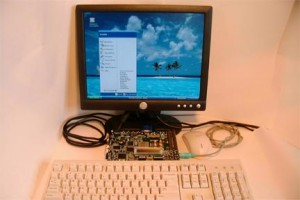 Hardware Unified Multiple Branch Logic Engine (HUMBLE©), attempts to convey the new architecture innovation and value thereof all in one word. Essentially it is a compression of the well known microprocessor and windowing operating system into one chip without re-using either in any way shape or form. We assert it is the first genuine and practical alternative toward extending general purpose computing. The HUMBLE© PC proof of concept, also known as the HUMBLE© PC development system provides tangible evidence today toward extending, including, and performing many things dreamed (for years by many).

Background and details — The Humble© PC is based upon the same foundation which all computing engines rest. This implementation is a first introduction in this form. Quietly rethinking the whole past-present-future computing problem a new solution emerges . . . Learning from past and present technology and following wisdom as a guide, Humble© begins as such by removing the conventional microprocessor (uP) and conventional operating system (O/S) altogether. However, re-linkage to either or both as legacy-tandem options clearly remains possible. Thus, rather than presuming single, dual, or many microprocessors with exponentially increasing s/w complexity into an already burdened software time-multiplexed serial fetch-decode-execute architecture, Humble© performs these in complementary fashion thereby un-limiting the 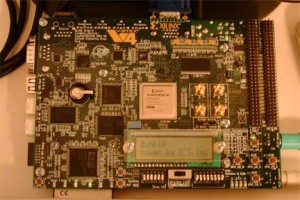 number of threads, un-limiting paralleling of applications, removing unnecessary coupling of time-multiplexed streams, achieving multiple execute-execute-execute, while exchanging exponential increasing complexity for linear, hence removing all the burdens, bottlenecks, and apparent brick walls. Humble© unifies threading, branching, scheduling, applications, etc. at the silicon level (rather than in disk-memory-resident-software) thereby producing 100s to 10,000s fold speedup coexisting with improved reliability and security (preventing virus entry altogether into the operating system, application programs and drivers . . .). Whilst these features and benefits are not possible in conventional software unified systems, they are possible in hardware unified systems. Advancement of technology slowly opened the window for this alternative during the recent 10 years. Utilizing a readily available (open) off the shelf general purpose field programmable motherboard, and an open language, the Humble© PC comes to life re-revolutionizing computing, minimally reminding us that solutions result from how well we have received Understanding (with a capital U). Present features and benefits are intended toward proof of these foundational concepts, and are not-limited by the concepts themselves nor by present technology. For example wireless features have not been implemented first as they are extensions of the basics. Hence wireless features are presently one of many opportunities for others to add. The application suite is also bare providing wide-open opportunity for others. In its present form, Humble© proves a better ‘core’ solution does exist now enabling true real-time-smooth-all-together-concurrency-fusion of multiple-forms-of-audio-telephony-television-gaming and computing including reliability, instant-on/off access, higher overall performance (bandwidth), lower power, and with much improved security, all built in. No new languages and no new silicon advances are required, rather a greater understanding of Understanding.

Question – What is meant by Hardware Unified? Answer – A conventional uP and O/S performs its operation through software control of hardware. Therefore we assert the software unifies all operations. All commands and system status are input ultimately to software and all actions/results are consequences of decisions made in (by) software. Hardware unification allows user commands to enter directly into hardware with status and decisions made directly by hardware. Thereby relegating storage of instructions to a memory of any sort including hard disk (fetched to a memory-cache – decoded and executed) as a legacy-optional method. In other words history will begin to record that instructions no longer need to be fetched from memory (or disk) . . . when using a Humble© PC.

Question – What is meant by Multiple Branch Logic Engine? Answer – Generally speaking, a conventional single uP with its O/S performs single branching wherein only the processor computes. From any one instruction to the next, the conventional uP and o/s typically can only branch from one instruction-point to another (within a program), or one instruction within a program to one instruction within another program. Humble© allows point to multi-point, process to multi-process, and program to multi-program branching wherein each may simultaneously compute with corresponding return. These are all performed without accessing a disk or memory for instructions (hence without associated delay). This kind of engine provides control for multiple concurrent io transactions and applications rather than multiplexing single io transfers and applications. Further, Humble© does not use a microprocessor nor derivative/variant thereof. NISC is a 2nd acronym helping describe Humble© further. See www.ecs-pc.com Frequently Asked Questions for a definition of NISC architecture with comparison to RISC and CISC.

Question – If Humble© has no microprocessor what does it have? Answer – Humble© has hardware that includes wires, logic, flipflops, and small block memories, etc. that do not include a microprocessor nor soft microprocessor. So, Humble© may be likened to a ‘core’ breakthrough without a new (or old) microprocessor as the core. Humble© successfully re-describes time multiplexed software programs (from scratch so as not to infringe on prior art) as hardware programs reaping benefits thereof. In other words we have discovered how to write all functions of a personal computer into ‘hardware programs’. This is evidenced and demonstrable via the available development system. See www.ecs-pc.com Frequently Asked Questions for more information . . .

Development systems and Licenses are now available. The cost to reuse (license) Humble© is 99 U.S. dollars. The cost of a development system is 5000 U.S. Dollars. Humble also refers to our approach toward business. For more information, see our website at www.ecs-pc.com and YouTube video http://www.youtube.com/watch?v=i_v6IaD6-Ts Electronic Compute Systems, Inc. is a privately held corporation based in Towson, Maryland. ECS hopes to sell 10 development systems over the next year.